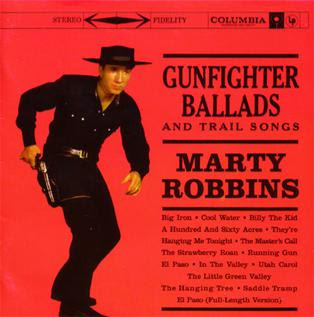 A fatal slip has been made. Texas Red did not clear leather before he met his match.

The Arizona ranger was a drifter; he'd come to take an outlaw back dead or alive. His bounty was that of Texas Red, whose pistol held one and nineteen notches. The presence of the ranger was relayed to Texas Red & the two were to meet at twenty past eleven. Never has the swiftness of the ranger been matched, speed unknown to any man, unseen by any eye before that day. Texas Red's pistol remained in its holster as the ranger made his mark. Oh did Texas Red ever make a fatal slip, as the ranger's aim was deadly with the big iron on his hip.


Author's Note:
One of my all-time favorite artists is Marty Robbins. He's just the absolute essential early country artist for anyone hoping to explore that genre. I believe he should hold the top spot that is currently occupied by one Mr. Hank Williams (even though Hank is a legend as well). I set out to do two quick little entries summarizing/reworking the song 'Big Iron', which is likely Marty's most popular song. This was a fun project, as it meant I got to listen to Big Iron with a very specific purpose.

Week 12 Reading: Five Brothers parts A and B

Oof, this is a beefy story. Elizabeth Seeger has gone more in depth in this telling of the Mahabharata than I would've expected. This was a really interesting read having already gone through two version of the Mahabharata. This edition definitely had the strongest character development as well as allowed the greatest amount of access alignment. Seeger really gave the reader the chance to get into the mental states of the Pandu brothers, reading into their turmoil, motivations, and follies. I am very excited to see how the end of Bhishma and Drona come about in this story, as Seeger infuses such life into her writing. I feel those moments will be very heavy and lead to no small amount of introspection. 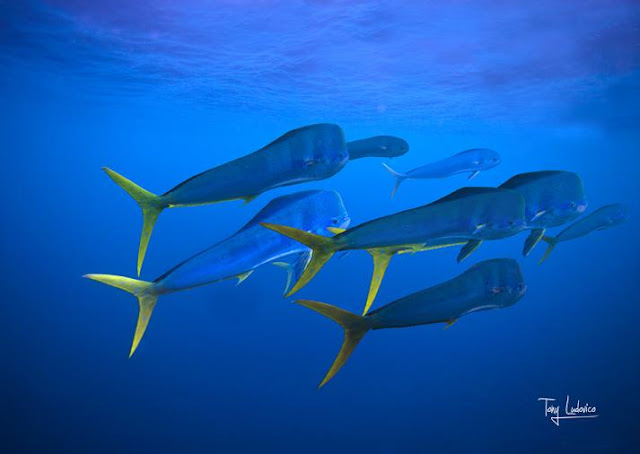 SINGLE ACT: FISH AGAINST THE NET

Many fish learn to cooperate out of necessity; whether moving in a pack to avoid predation or acting as a school to learn from one another. There are lessons to be learned from team work and the lapse thereof.

FISH ONE
Come on man hold your line, you keep bumping me
FISH TWO
You’re the one who can’t swim straight, don’t lecture me
FISH ONE
I disagree, I’ve been keeping my eyes on the horizon the whole time. Therefore, I can’t be drifting.
FISH TWO
Sure pal
WISE FISH
Careful, gentlemen, learn to work through your issues otherwise you’ll be the death of us all.

The two disregard and let their resentment simmer
The fish continue along, aloof.
After some time we rejoin the school
A net enters view and engulfs the school

WISE FISH
Quickly now everyone, if we all push down the net will release, but we have to work together.
FISH ONE
I refuse, this guy keeps bumping me
FISH TWO
It’s you bumping me
WISE FISH
Friends, there are more important things to consider at the moment, we can discuss your conflict later rather than sooner
FISH ONE & FISH TWO
Fine

WISE FISH
See friends, when we work together despite our differences we can overcome great obstacles

More time passes, the fish work together to break from the net many times - but resentments aren’t done away so easily

We see Fishes One and Two in turmoil once again

FISH ONE
I’ve had enough of this. You need to learn to swim straight, with the school, with your neighbors. You’re going to cause the death of us all as you break down our cohesion.
FISH TWO
Dude it’s you who can’t swim straight, you’re at fault.
WISE FISH
Friends, it doesn’t matter...

The wise fish is cut off by a whooshing sound
Suddenly, the fish are again in the throws of battle as the net begins to capture them

WISE FISH
Now, we must again set aside differences as we have time and time again for survival
FISH ONE
No! You continuously say “we’ll get to your issue later” and dismiss my feelings!
FISH TWO
It’s my feelings he’s dismissing and you shouldn’t be concerned with your own as you’re the one creating the problem!
FISH ONE
No I am not, you cannot control yourself
WISE FISH
Fish, we must focus on the greater good

But it was too late, the net indeed covered the school and completed its cinch before the group could organize.
The fish are entangled and brought to the surface where they’re dumped aboard the ship - all on each other - all bumping each other.

It is not a matter of who carries the blame, for every individual does. In refusal of fault, each fish succumbed to stubbornness which doomed the group. However, was the wise fish not also wrong for diminishing the importance of conflict resolution? Certainly he is also to blame.

Author's Note:
This is pulled heavily from the "Quarrelsome Quails" Jataka Tale and the scene in Finding Nemo where the fish swim against the net. The original Jataka Tale has the bulk of the birds, including the king, abandon the two who are in conflict, leading to the death of the two and the survival of the bunch. This irks me a bit as you'd think the king would feel some obligation to intervene on an issue within his kingdom. Instead he simply leaves, it's a very Laissez-Faire rule. In my telling I decided to have the king be reduced to a wiser fish, with the name as a nod to the actual lack of wisdom posed by the character. The wise fish who seems to be something of a ruler states that their issue will be addressed later to assuage them in the moment, but he doesn't follow up in earnest. I believe this makes him equally responsible for the crisis and thus deserving of the same fate as the two truly struggling.

From these stories we can again and still pull many principles and lessons. I believe that from the second installation of Jataka Tales my favorites are The Ox Who Never Envied the Pig and The Crab and the Crane. The latter speaks to capitalizing on the lack of security of others, speaking against such predatory behavior. It's a timeless story that is extremely versatile in application.

Posted by bfillmore at 9:36 PM No comments:

For the first reading section this week I chose to read through the Jataka Tales. I always love any chance to read these stories as they're such a fun jaunt into principle, ethics, morals, and wisdom. They always do a fantastic job of communicating information in a very succinct, enjoyable way. I won't write summaries of each one, as they're already brief enough and it would be a be rude to cut them down any further. Essentially, each tale lays out a scenario where someone has a goal (usually devious) and selfishly pursues the goal until failure. There's always a lesson in one of the above areas and it's always very clear cut - these tales rarely have any ambiguity in communication. 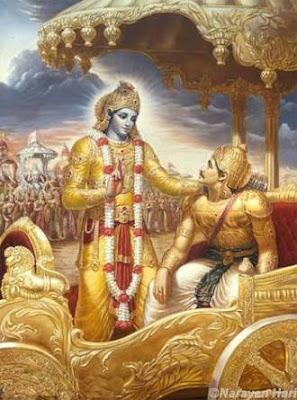 SINGLE ACT: KUNTI & KARNA
INT.
In times of strife mankind defines itself; individual’s truest selves emerge to be welcomed or scorned. This is no different than the turmoil Karna felt on the eve of his battle with Arjuna. As Karna steeled himself mentally and physically, preparing for such warring, his mother, Kunti, sought him out in hopes of changing his perspective.
INTERIOR TENT - DIMLY LIT - KRISHNA ENTERS
KRISHNA
Karna, if you accompany me back to the Pandava camp and we speak to the brothers together they’ll surely not find you wanting. They simply don’t understand your role in all of this; if you explain they’ll yield to you.
KARNA
I cannot simply abandon those who rely upon my words out of some thin hope for reconciliation with those who neither want nor seek reconciliation. Leaving Duryodhana now would end our counsel and our friendship.
KRISHNA
Not at all, these are wise men - even if tempers are high and the Pandavas are full of vitriol they’ll be made to understand. Karna..
KARNA
Enough, what you speak of is desertion, it’s folly, it’s weak. There is no sense in my abandoning my role here for the potential of a lesser post in a weaker, unformed empire.
KRISHNA
They’ll make you king if they learn of your lineage.
KARNA
Even if they yield to me, even if they cede the throne to me, history will remember me as a lesser Arjuna. I’ll go down in the annals of time as a pretender. The records of me will not show this; I will meet Arjuna on the field and our clash will display some level of providence. Our struggle will establish dominance, it will be decided who is stronger, neither will yield. Now, Krishna, our time together must come to an end. If we’re lucky we’ll meet again soon - our forms may be earthly or celestial, but regardless we shall meet again soon.
KRISHNA
Truly, Karna, you’re stronger than what is known and stronger than what will be remembered.
The two embrace, their respect for each other is obvious, but they cannot remain together as this struggle does indeed drive a wedge between even friends


Author's Note:
I set out to write this specific exchange because I think this episode of the Mahabharata is amazing. The dialogue between Krishna and Karna is easily one of the more powerful moments in this epic, as we see both men so entirely vulnerable. They're explaining in as many words their need to be recognized, but this need for recognition and love drives a wedge. We see Krishna appeal to Karna in an attempt to prevent the battle between him and Arjuna, as it would be such a senseless loss of greatness if even one of them were to fall, but because of that respective greatness Karna feels he must go to war, if for nothing else than to prove himself. The fear of being in Arjun's shadow beats his risk of death and so he goes to war. I expanded this conversation some from the original telling and hopefully it communicates effectively how important this exchange is to the unfolding of the epic.

Week 9 Reading: Mahabharata Parts A & B 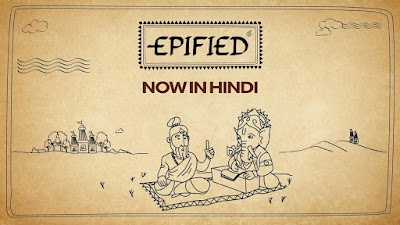 It was interesting watching through the Epified Mahabharata; I feel like I gained a greater understanding of the timeline established early in the story. We see the development of the people who are responsible for the development of the next era of the story. I think the episodic version of the epic lets the viewer get more involved in the world, as we see the characters visually. The ability to see the emotions of individuals visibly helps tether the viewer to the story. The plot follows the Mahabharata as earlier readings have done. Something that struck me more clearly this time through was the impact on Drona that the meeting, and subsequent rejection of, Ekalavya.